Coronavirus Update: 1 million cases of infection in the United States in 100 days 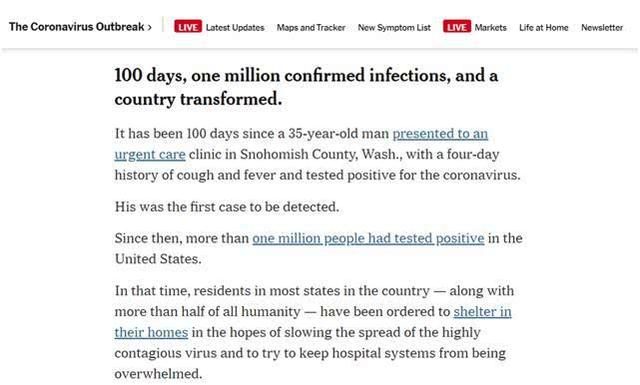 At the node where there are more than 1 million cases of new coronavirus infections, the New York Times made a simple review of what happened in the past 100 days.

“100 days ago, a 35-year-old man appeared in an emergency medical clinic in Snohomish County, Washington. He had cough and had a fever for 4 days, and the new coronavirus test was positive. He was the first to be discovered (new coronavirus Positive test). “

“Since then, more than 1 million people in the United States have tested positive for new coronavirus.”

There are over 1 million cases of new coronavirus infection in the United States within 100 days. What happened during this period?

The New York Times said that during this time, residents of most states in the United States and more than half of the world’s population were isolated at home to slow the spread of the virus and try to avoid overburdening the hospital system.

Over the past 100 days, more than 53,000 people in the United States have died from infection with the new coronavirus, accounting for about a quarter of global deaths (210,000).

Epidemiologists estimate that the actual number of infections may be about 10 times the known number. Similarly, according to the analysis of death data by the New York Times, the official death data published by the United States is likely to be far less than the real data.

The report continued that the timeline of the US epidemic changed as public health authorities found evidence of the spread of the new coronavirus in the community earlier than expected.

For weeks, no one has celebrated a normal birthday party with friends, no one enjoys a wedding, and no one weeps at a large funeral.

Over the past 100 days, the global economy has suffered a rapid and sudden recession, so that economists have to go back to the Great Depression to find similarities.

The New York Times also stated that over 26 million people in the United States have lost their jobs. The US Department of Commerce is about to release the GDP data for the first quarter of this year on Wednesday (29th). It is expected that there will be even more shocking news.

According to reports, with the highest number of infections and deaths in the world, the national image of the United States has suffered worldwide, and Americans are forced to reexamine their self-image.

The report also said that the United States watched the president talk about the epidemic almost every day. He sometimes misled, vented his resentment, acted rudely, and sometimes acted dangerously, and was often mixed with bragging.

Latin America is losing the battle against coronavirus

It's been another bad week for Latin America.
Read more

Police forces across US promise reform

Today marks the 12th consecutive night of protests since the police killing of George...
Read more

Iraqi lawmakers have signed off on the rest of Prime Minister Mustafa al-Kadhimi’s government...
Read more

Read more
Previous articleItaly Was Once The Epicentre Of The Coronavirus. But A Report Says It’s Far Too Early To Lift Lockdown Restrictions.
Next articleFormer GOP congressman to run for US President as Libertarian

Coronavirus-eyes.com is a website to provide the all information about Covid-19 and news. We provide live data map. Stay with us and keep you safe.